One my example of interpolated string (taken from here):

Interpolated string are easier to understand than a composite format string.

To assign IEnumerable to a new instance of IEnumerable, you will need ToList method. Here is an example: 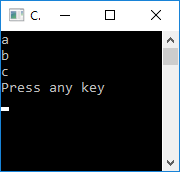 "c" is displayed also in instanceTwo.

Now to have two separate instances of IEnumerable, we need something like:

Result will be still as in previous picture, "d" is not added to instanceTwo, since now we really have separate instances.

IComparer example, with numbers first, and empty strings at the end:

First one my small example:

According to Regular Expression Language - Quick Reference, pattern [a] means:

Another example comes from codewars. Task was:

Polycarpus works as a DJ in the best Berland nightclub, and he often uses dubstep music in his performance. Recently, he has decided to take a couple of old songs and make dubstep remixes from them.

Let's assume that a song consists of some number of words. To make the dubstep remix of this song, Polycarpus inserts a certain number of words "WUB" before the first word of the song (the number may be zero), after the last word (the number may be zero), and between words (at least one between any pair of neighbouring words), and then the boy glues together all the words, including "WUB", in one string and plays the song at the club.

Recently, Jonny has heard Polycarpus's new dubstep track, but since he isn't into modern music, he decided to find out what was the initial song that Polycarpus remixed. Help Jonny restore the original song.

Matches the previous element one or more times.

And one more my, from my point of view, easier, example:

Result is "ma" - multiple "ta" is replaced with one ma